Just as prospective homebuyers are attracted to St. Louis Hills for its lovely parks and beautifully landscaped yards so, too, are they drawn to it architecture. From the gingerbread bungalows to the stately 2-stores to the sprawling ranches, St. Louis Hills residences are a study in contrasts and choices. The clearest divisions in architectural styles can be seen by examining the areas to the north and to the south of Eichelberger Street, which basically divides the area into St. Louis Hills and St. Louis Hills Estates.

North of Eichelberger Street one finds houses, duplexes and apartment buildings, many built in the 1930’s and 1940’s strongly influenced by the art deco style. Hardwood floors, stained glass (often with southwestern motifs), elegant stone work, glass block trim, casement and circular windows, and zigzag brick patterns characterize these structures. Slate or tile roofs, once mandatory, but prohibitively expensive to replace, have in a few places been replaced by shingles.

In the 6300 block of Bancroft Avenue a row of bungalows dubbed Hansel and Gretel houses faces well-maintained four family apartment buildings. All were built in the 1930’s and share many of the art deco features. On Nottingham Avenue, closer to Francis Park, is one of the Hills’ architectural landmarks, the Vedder apartment building. Rich in art deco details it boasts curved corners, casement and circular windows, and complicated brick works. What makes it particularly special is that all six units have penthouses.

The homes and apartments surrounding Francis Park typify much of the rest of the neighborhood. On Nottingham Avenue, north of the park, it is easy to find examples of the porthole windows, zigzag brick and glass block trim in the two and multi-families which have been lovingly maintained over the years.

East and west of the park stately 1.5 and 2 story homes line Tamm and Donovan Avenues. No two are alike. One Regency style home facing the park on Tamm was featured in a 1936 edition of McCall’s magazine, as were several others in the Hills. Just west of the park on Itaska Street stands one of the neighborhood’s most unusual art deco homes, an eight-sided house, each whose sides differs in length.

For those who prefer the style of suburban homes, but choose to live in the city, St. Louis Hills Estates is the perfect location. Many of the larger ranches and 1.5 story homes sit on huge lots that afford ample room for in-ground pools, which several of these homeowners have added. Nearly all of them have attached one or two-car garages and most have main floor family rooms. Since only ornamental fences are permitted in the Estates, the feeling there is one of wide-open spaces.

Although many prospective home owners come to St. Louis Hills seeking its classic Tudors and colonials with their abundant stained glass and ornamental brick and stone work, this neighborhood boasts such a wide variety of architecture that it will appeal to nearly any preference and need. St. Louis Hills is a community rich in architectural history and detail. 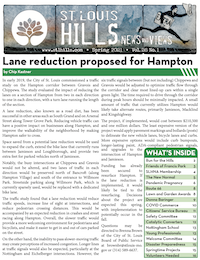